The whole is not a sum of equal parts

"No matter how obvious something may seem, there are two sides to every story."
- Erin Bowman, American singer and lyricist

456 million1 vaccine doses have been administered in India till date; about 37% more than the entire US population! India's government has ambitiously announced that the entire adult population (740 million people) will receive at least one dose by December 2021. The logical next question arises: How do these precious doses get prioritized and allocated in a country with vast regional, demographic, economic and cultural variances?

Four states: Maharashtra, Tamil Nadu, Karnataka and Gujarat (for ease of reference, let's call them the Heavyweights), contribute disproportionally to India's economic prosperity. Of the 29 states and seven union territories that constitute India's ~$2.7 trillion economy, these four Heavyweights generate as much as 38%. Their GDP per capita is ~55% higher than the national average and has grown at a CAGR of 10.5% over the past five years. With a combined GDP of ~$1 trillion, the Heavyweights would rank as the 17th largest economy, larger than each of the Netherlands, Switzerland and Saudi Arabia. However, these states make up only 25% of India's population (~300 million).

On the other hand, Uttar Pradesh, Bihar, West Bengal and Madhya Pradesh are relatively populous and underdeveloped states (the family-friendly states or Laggards, if we may). These family-friendly states house 43% of India's population while contributing only 21% of GDP. Their GDP per capita is 46% below the national average and unfortunately trails mean economic growth as well. 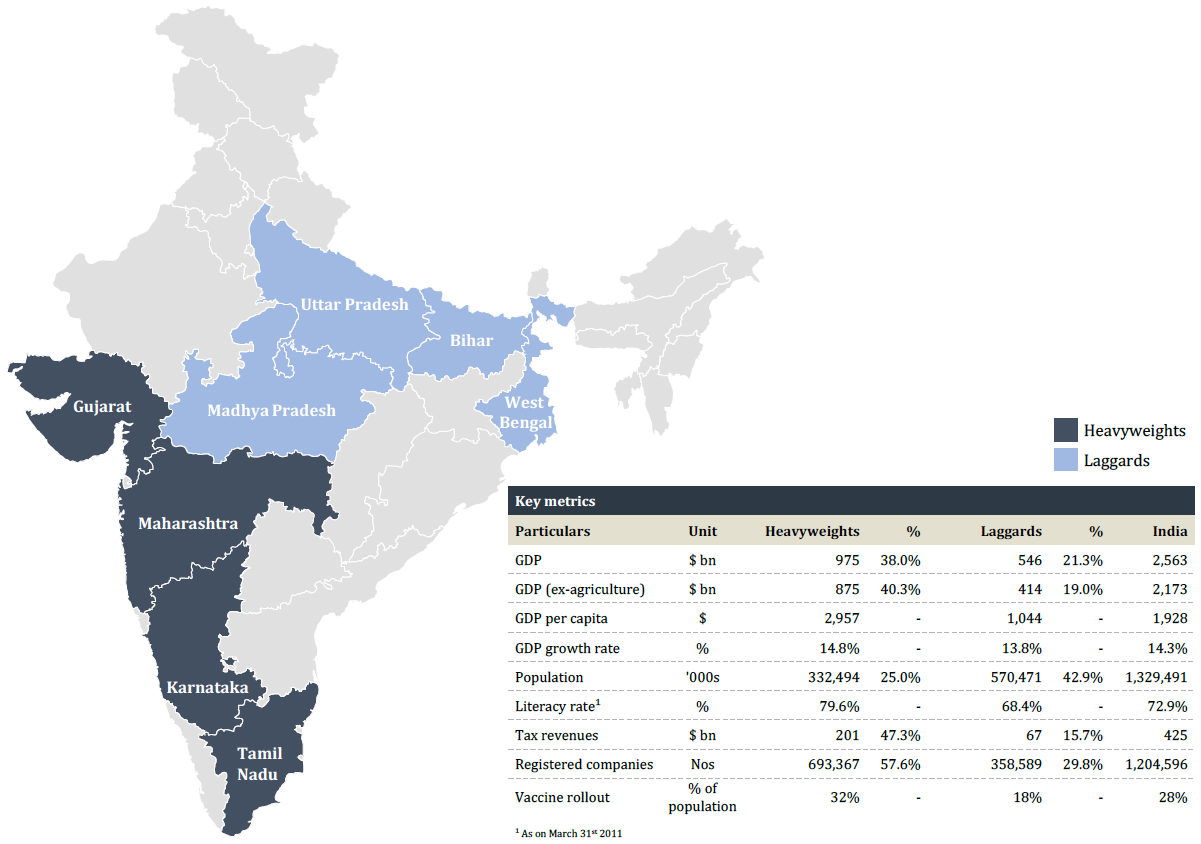 One has to wonder what factors have contributed to the outperformance of the Heavyweight states. The reasons are numerous but include the following: Maharashtra and Gujarat comprise a huge swathe of India's western coastline; Being well connected through both air and sea routes, these two states have become manufacturing and distribution hubs; Given the ease of transport, an impressive 58% of India's cargo volumes flow through the four Heavyweight states; Karnataka, distant from unfriendly borders, became a hub for engineering and defence businesses which gradually morphed into strong IT capabilities (today, Bangalore boasts an impressive 2 million IT professionals, about double that of the original Silicon Valley!); Tamil Nadu has traditionally been the textile hub of India, providing direct employment to 35 million people, contributing 4% of India's GDP and 35% of export earnings; Maharashtra houses India's commercial and financial capital of Mumbai, with Pune being a major auto hub servicing the domestic and global markets (as is Tamil Nadu).

Ironically, the Laggards are rich in natural resources, indicating that development has been impeded by social and environmental factors. Madhya Pradesh, West Bengal and Bihar have large quantities of coal, diamonds, limestone, copper and bauxite. Uttar Pradesh, the fourth Laggard and the most populous in India with 227 million citizens, has a history of being a lightning rod for political and communal strife.

Unsurprisingly, Uttar Pradesh and Bihar are major exporters of unskilled labor (contributing 25% of India's 500 million migrant workers). These Laggard states have remained economically backward even as their people contribute materially to the prosperity of their Heavyweight neighbors.

About 58% of companies have their registered offices in the Heavyweights, which also contribute 47% of total direct taxes, underscoring their importance to the country's exchequer. A better-developed infrastructure and a larger presence of manufacturing and service-oriented companies have resulted in these states contributing disproportionately to business formation, productivity and hence tax revenues.

When it comes to political representation, the Heavyweights represent a mere 26% of the 543 seats in the Lok Sabha, the lower house of Parliament. Uttar Pradesh which contributes just 9% to GDP, votes 15% of seats. With the exception of Narendra Modi who is from Gujarat, most other Prime Ministers and senior Ministers in India's history have come from poorer states, re-emphasizing that politics is driven by votebanks rather than economics.

While the Heavyweights will continue to play a significant role in achieving India's $5 trillion economic target by 2025, the upliftment of the remaining states will deliver the 'last mile' of achieving the goal of overall development and prosperity. If the GDP/capita of the Laggards states, currently half the national average, could catch up in the foreseeable future the impact would be tremendous. A recent article2 by the London School of Economics highlighted the disparity between India’s states and their growth rates; however, it also cited a 'spill-over effect' by which successful states contribute to better development of their less prosperous neighboring states. We remain cautiously optimistic.

Around the world, we see sharp regional variances not dissimilar to India. In the US, California and Texas are economic powerhouses, while Alabama and Missouri lag considerably. China features extreme population density around the coast lines while the hinterland tends to be neglected. The EU constitutes a kaleidoscope of economic variances with a political system that gives undue influence to weaker member states. In all cases, we have seen sharp variances in medical systems and policy decisions towards prevention & vaccination.

The Indian government has tried to approach the vaccine distribution conundrum equitably, with vaccines being distributed broadly based on population density per state. While distribution has been even, the efficiency of administration across states has been less so. The Heavyweights have received only 3 million more vaccines doses than the family-friendly states but have a much higher percentage of the adult population vaccinated (~32%) compared to the Laggards (18%), perhaps reflecting their superior administration and execution capabilities.

Some have argued that allocation of doses should have favoured the Heavyweight states since they are the economic powerhouses, while others have postulated that the Laggards pose the highest risk due to their migrant populations. Any approach opens the government to inevitable criticism – and that is the strength of a democracy. We are hopeful that as the year progresses and inoculation rates rise, the country will see a fall in cases and fatalities, resulting in a sharp resurgence of economic activity.