The elephant in the room

"The recently released quarterly [Indian] GDP growth numbers for the first quarter of FY 2020-21 should alarm us all.
The 23.9% contraction in India compares with a drop of 12.4% in Italy and 9.5% in the United States, two of the most COVID-affected advanced countries".
- Raghuram Rajan (former Governor, Reserve Bank of India)

Given that the economist in us would tend to link economic growth with the performance of individual companies, this news looks worrisome. With the nation going into an extended lockdown, contraction was inevitable. The magnitude of contraction does raise questions about the economic trajectory going forward.

Seeking clues as to what the future holds, we deconstructed this contraction. The worst affected components of GDP included: (i) a 50.3% contraction in construction, (ii) a 47.0% contraction in hospitality and transportation, and (iii) a 39.3% contraction in industrial manufacturing. Roughly 1.4 billion people sitting at home for four months was bound to result in fewer roads, houses, and buildings being constructed!

Unlike prior instances when the Indian Rupee has seen sharp devaluations during periods of fiscal tightening, the currency has remained stable at Rs 74.50, with FX reserves reaching $545 billion, the highest level ever. It appears that the RBI's cautious approach towards monetary stimulus, protection of India's sovereign rating, and bolstering FX reserves has resulted in a stable currency regime.

Notwithstanding the strong currency and FX reserves, critics were quick to protest that the government should provide fiscal stimulus, particularly to hard-hit sectors. While recognizing the Indian government did not provide the same level of stimulus as the US government ($2 trillion, 13% of GDP), it is also important to understand the delicate balancing act required in a less wealthy nation that lacks a reserve currency.

Among the components of GDP that weren't as affected, basic consumption-oriented areas remained resilient. Having examined numerous market shocks, the Nobel prize winning economist, Milton Friedman, postulated that consumers will continue to spend at a level consistent with their long-term average income – essentially a relatively inelastic consumption curve notwithstanding periods of exuberance or panic.

As we look at monthly data, we believe that Friedman's hypothesis has played out with consumption and production rebounding to 'normal' levels fairly quickly. While power demand and exports are nearly back to 2019 levels, railway freight, petrol sales, GST (goods and services tax) collections, and manufacturing PMI have each surpassed the prior year. These data points are encouraging for the months and quarters ahead.

What has been somewhat overlooked in this entire 'GDP-centric' drama is the strong performance by sectors that rose to the occasion, namely consumer goods, chemicals, pharmaceuticals, IT, and logistics. Even in sectors that have been badly affected such as financial services, hotels and real estate, certain well-managed businesses are 'rising to the occasion' by aggressively restructuring their businesses, which should allow them to reap disproportionate profits as volumes rebound. 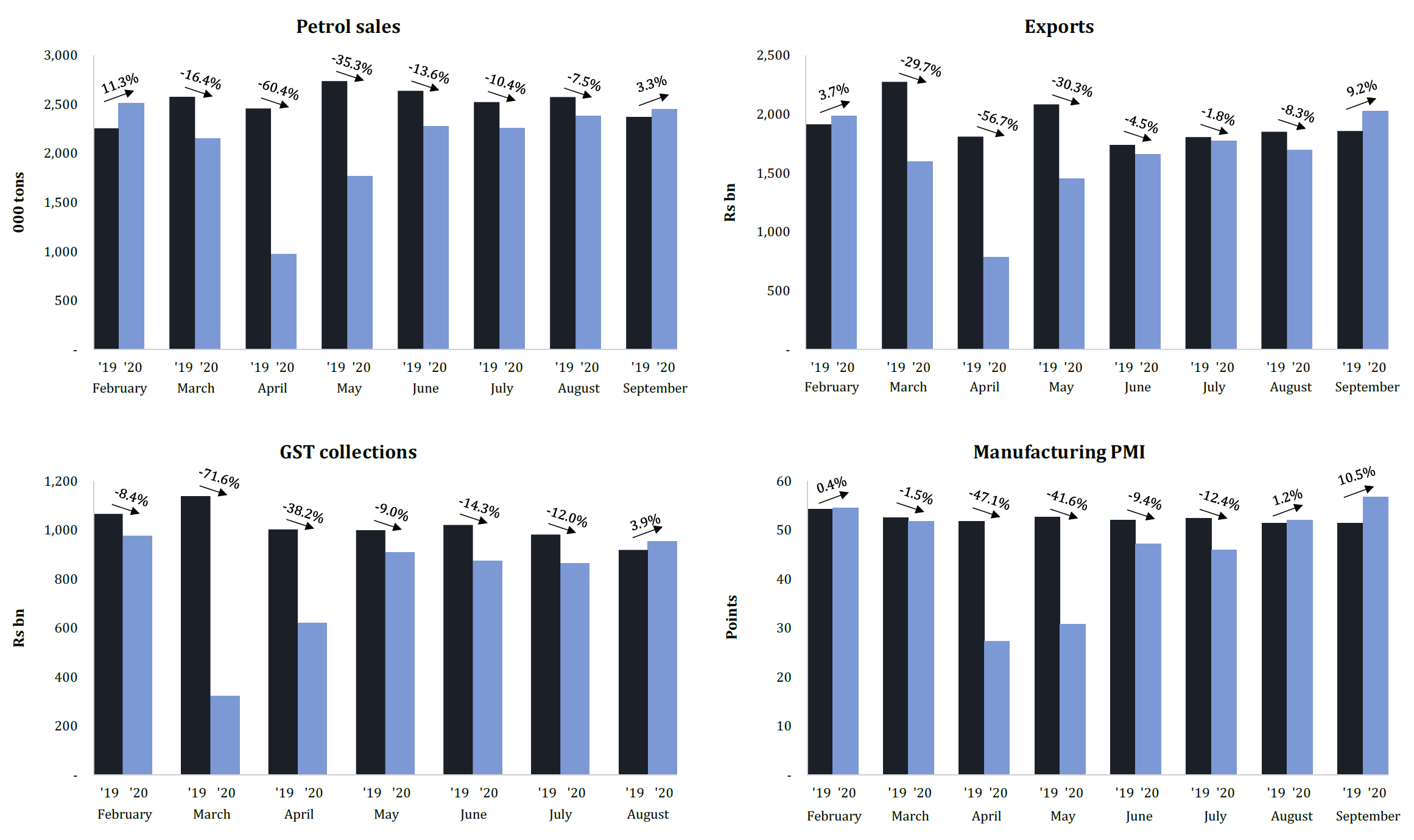 Survival of the fittest

For months, pundits have talked themselves hoarse over the shape of the recovery curve – 'L', 'U', 'V', 'W', 'Z', even the 'Nike swoosh'! However, reopening brought to light a deep divergence between segments of society and businesses, and a new letter was added to the lexicon to illustrate the complexity of the situation.

In the context of recovery, the letter 'K' reflects the 21st-century capitalistic ethos: the winner takes it all!

Indian pharmaceutical companies have flown high on the tailwinds of the pandemic, given that they supply 50% of global demand for generic drugs. Many big-pharma innovators have already signed agreements with Indian majors including Serum Institute, Jubilant and Zydus Cadila to manufacture potential vaccines.

In 2019, China exported $220 billion worth of chemicals and pharmaceuticals to the rest of the world. In contrast, India's exports were only $19 billion. With India emerging as a reliable alternative to China, even a minor 10% diversification in exports from China will result in India’s exports doubling!

This song doesn't sing true for all, though. In many ways, Indian banks are realizing the meaning of the phrase, 'survival of the fittest'. Undercapitalized banks like Punjab and Maharashtra Co-operative Bank (PMC) and Lakshmi Vilas Bank (LVB) are in a dire state. This time last year, PMC was already treading on thin ice. With the pandemic having struck, PMC's net worth has been wiped out, its depositors are struggling with restrictions on withdrawals and the RBI is faced with a proverbial Hobson's choice. Similarly, after a mountain of unserviceable NPAs, LVB was put under the RBI's Prompt Corrective Action (PCA) plan.

On the flip side, banks such as HDFC, Kotak Mahindra, ICICI, and CSB have focused on maintaining (i) rigorous underwriting practices, (ii) high levels of capitalization, and (iii) focus on streamlining and digitizing wherever possible. To that end, new measures like the Open Credit Enablement Network and Account Aggregator Framework have catalyzed a broader shift to contextualize and embed credit pervasively. The shift to tech-enabled banking is reflected in three of the four financial services IPOs thus far this year: SBI Card ($1.3 billion), CAMS ($300 million), and Angel Broking ($80 million).

It is well known that India has emerged as a key provider of technology and engineering services for the world. As segments of the workforce shift to a work from home environment, IT & BPO companies are poised to benefit from increased outsourcing. Even during the pandemic, leaders like Tata Consultancy Services won $1.5 billion contracts from global customers.

Within the consumer products industry, the urban sector remains the largest contributor, accounting for nearly 55% of revenues and characterized by a strong marginal propensity to consume, rising health & hygiene consciousness, and a willingness to adopt online channels. The pandemic has not only deepened and solidified these characteristics, Sanjiv Mehta, CEO of Hindustan Unilever (HUL), commented:

"This pandemic can have a lasting impact on human behaviour. One clear trend, of course, is a heightened awareness of hygiene. The pandemic has clearly raised the need for clean living, protection, immunity, and wellness. We have seen in India and in many other global markets that consumers at this time do gravitate towards large and trusted brands."

This shift towards trusted brands has put large consumer companies like HUL (and their contract manufacturers like Hindustan Foods) in a position to consolidate. With HUL's revenues for the September quarter increasing 16% compared to the same quarter in 2019 and HFL posting its strongest quarter in history, there is little doubt that the pandemic has catalyzed growth. But that's not all... companies have taken advantage of opportunities to consolidate. In March 2020 HUL signed an agreement with Glenmark to acquire its intimate hygiene brand VWash. Similarly, Tata Consumer acquired NourishCo from PepsiCo in May 2020.